I have enjoyed Montelle Winery since the mid '70's when they were located west of Augusta Missouri above the Missouri river.

Montelle was one of the first Missouri wineries to produce quality dinner wines as opposed to fruity pop wines. They produced a small batch of premium red wines each year with names such as Cask Arthur, Cask Victor etc. I saved some of these for more than 10 years and found them to be fantastic wines that totally amazed me.

Montelle was also one of the driving forces behind America's first designated viticultural areas known as an "Augusta".

Montelle subsequently moved to a location just north of Augusta, on highway 94, also known as the Missouri Wine Strasse. A change of ownership has not affected the quality of their wine production.

While going through my wine rack, I found a 2010 Montelle Chambourcin and decided to give it a try. I let it breath for about twenty minutes before serving it with a strip steak topped with blue cheese.

I was surprised at the extremely smooth finish of this wine. In its early years it has a bit of an edge, but still goes well with beef and Italian dishes. This wine was almost "buttery"! As the meal went on I was able to first taste a cinnamon spice flavor, then a bit of a smokey taste followed by a touch of caramel!

Having live and worked in France, I found this bottle of wine to be equal to, or better than many well known French reds. I am impressed!

If you have not tried a Missouri wine please do yourself a favor and enjoy a great wine from America's first AVA.

I also suggest you try a Missouri Port, they are awesome! 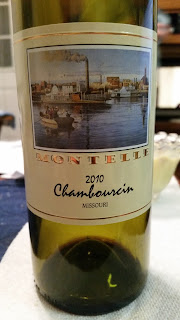 Posted by Kevin and Sue McCarthy the Travel Planners at 9:29 PM No comments: