We ate dinner tonight at Boombozz Pizza on Hurstborne and left with mixed emotions.

This is a typical pizza and beer joint in the outer lot of a shopping center. The interior is typical industrial style with loud music, so loud that we asked to move to another table that was not under the speaker!

We started with soft pretzels and beer cheese queso dipping sauce. This was a very tasty appetizer! Next was a thin crust NONNA pizza. Once again, very tasty! I had a Blue Stallion Hefe Weitzen beer which was a true European style light beer. It was also good, but served too cold. I let it warm up a bit to get the great taste of the this beer.

We finished the night with an order of Nutella biegnets with a vanilla cream sauce. Caution, be careful when biting into these. They are filled with molten Nutella and you may easily end up wearing it on the front of your shirt or blouse. It did wash out easily with a napkin and water) Again, very tasty.

I would give this restaurant a somewhat high rating were it not for their staff. The hostess NEVER smiled the entire time we were there. This is certainly not the way to greet and seat your customers. The rest of the staff's appearance included what appeared to be members of the local skin-head club, and rejects from a tattoo class with a couple of man buns and saggy pants thrown in. None of this group added anything to my dining experience. The entire staff could certainly improve their appearance!

Overall, the food was good, but as they would text; "I prolly wont go back" 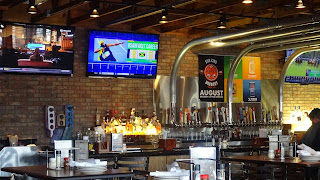 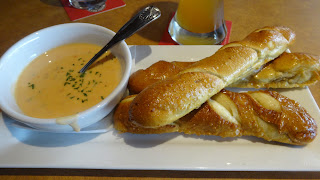 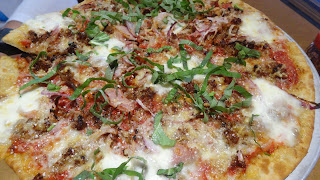 Posted by Kevin and Sue McCarthy the Travel Planners at 7:21 PM No comments: