On a quick trip to Texas we ate at two different restaurants. The first was Marty B's at Bartonville, TX It appears to be a relatively new restaurant but there were no flaws in the service. In fact, our server went out of his way to accommodate the finicky tastes of our granddaughter who asked for a salad with no tomatoes, cheese, onions or chopped eggs. She also ordered mac and cheese with no bread crumb topping.

BBQ and TexMex are the featured items, I had smoked pulled pork tacos that were huge and very tasty. My grandson had a bacon burger big enough for two people. Sue had smoked brisket tacos. Our daughter in law had a beautiful and tasty dinner sald and Sue's son had Texican Tamale Cake, a sweet corn griddle cake topped with smoked meat and a house made slaw with a side of charro beans.

Everything is locally sourced, organic and hormone/antibiotic free. Dinner for six with two beers was only $106.00. This is a great place! Plus, they have a hitching post in case you ride your horse to dinner! We will go back.

We flew home from Dallas Love Field and got to the airport early enough to have dinner. We ate at the Cool River Cafe inside the secure area of the airport. This is a restaurant and bar rather than a fast food hole in the wall. Our server was very nice but they were out of Stella Artois beer.

I ordered the Soy & Honey Salmon with molasses bourbon butter, crispy fingerling potatoes and broccoli. This was a large serving and well prepared. Sue had the Pasta Fernando, hickory grilled chicken & shrimp on trumpet pasta with spinach and peppers in a Grana Padano and Arevalo sauce. Again, a larger than expected serving and very tasty.

For dessert we had a Makers Mark Pecan Bread Pudding and a chocolate lava cake, both of which were excellent.

The only problem was we ordered a Sam Adams draft beer and a “dobel-rita” which came in a plsner glass filled with ice and very little margarita!. The beer was $9.00 and the margarita was $19.00!! RIDICULOUSLY OVER PRICED!! I guess that is why the drink menu has no prices on it.  I should have known better. Total price of dinner for two: $98.00!  Next time it will be Dickey's BBQ. 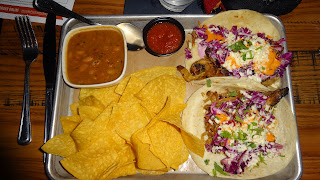 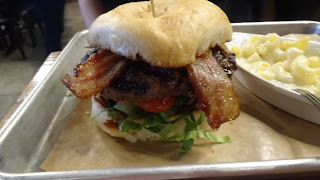 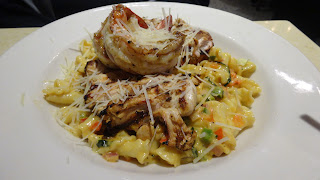 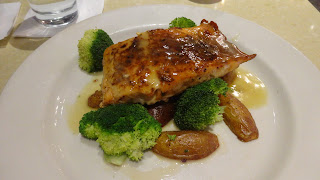 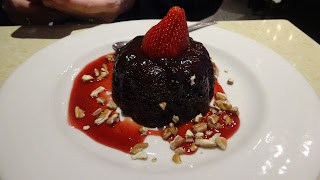 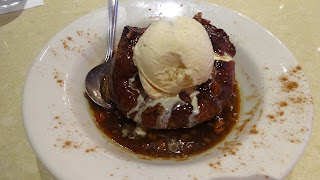 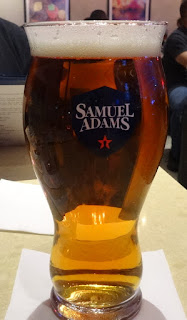 Posted by Kevin and Sue McCarthy the Travel Planners at 3:10 PM No comments: