Lobster, It's what's for Dinner at the Five fishermen, Halifax,NS

Lobster, It's What's For Dinner!

We had the recent good fortune to visit Nova Scotia which offered me the opportunity to try to eat my fill of culinary crustaceans.

Lobster is in season in Nova Scotia year round, but that may not be the case in a particular area where you are located. The season rotates through various geographical locations depending upon the time of the year. While fresh lobster may not be available in one city, a ten mile drive could bring you to an area where it is available. Of course, frozen lobster is always available.

While Poutine, french fries with cheese curds covered in brown gravy, may be the go-to fast food of Canada, Lobster is the signature dish of Nova Scotia. Roadside bars have portable signs in their parking lot that say “Beer and Lobster, Enough Said” You may have Lobster Benedict for breakfast, a lobster roll sandwich for lunch and a whole lobster for dinner. I like Nova Scotia. But if lobster is not for you, Nova Scotia also offers an amazing selection of other fresh seafood as well “Canadian AAA Steaks”. This is a grading system similar to “USDA Prime”. It is a tender, tasty, but more lean steak than it's US counter part.

We had a wonderful meal at the Five Fisherman restaurant in Halifax, NS. The building itself is of great historical importance for the City of Halifax.

In 1818 the parishioners of St Paul’s Church of England opened the building as a school. It would become the first school in Canada to offer a free education. It is for this reason that the building has the distinction of being the First National School and is a protected Heritage site.

The building changed hands to its new proprietor, Anna Leowens. She started an Art school, the Halifax Victorian School of Art. Before coming to Halifax, Anna was the governess to the children of the King of Siam, an experience she would later write a book about called “Anna and the King of Siam”. That book would be translated into the Broadway musical, “The King and I”.
The building was then taken over by the Snow family. John Snow & Co. Funeral Home would play a significant part in two of the world’s greatest disasters processing the victims of the Titanic disaster and the Halifax Explosion, the world's largest explosion prior to the Atomic Bomb! If you are not familiar with this. It is worth a google search. This appears to be the basis of the many reported hauntings throughout the building.
Our meal began with a Shrimp Cocktail for Sue and three different types of Fresh Oysters for me. The oysters came with fresh ground horseradish, hot sauce and a Mingonet White Wine dipping sauce, yum!
The wine list at the Five Fishermen is extensive, with world wide selections at reasonable prices. We had a Jost winery, Tidal Bay. Tidal Bay is a designated viticultural area wine made from the L'Acadie grape. It is a perfect accompaniment to seafood and only $19.00 per bottle.
Sue had Acadian Shellfish Tagliatelle, clams, shrimp, mussels and fresh herbs in white cream sauce with fresh sorrel sprouts. It was very rich and totally delicious.
I had the Classic Lobster dinner, a whole lobster with roasted potatoes and Chef's selection of vegetables that included carrots, broccoli, along with yellow and green zucchini. It more than met my wildest expectations.
Sue's dessert was a cherry tart with whipped cream and toasted almonds. I had a crème brulle' with currents, strawberrys and a pane of sugar glass. This was a great meal in a beautiful location in downtown Halifax, NS
The Five Fishermen is a multi-level restaurant with a bar area, dining rooms upstairs and down, private dining and an oyster bar as well as al fresco dining. It is a must visit place in Halifax and we highly recommend making reservations ahead of time It is always a busy place, but the service never suffers. 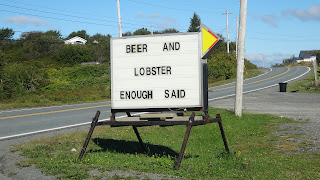 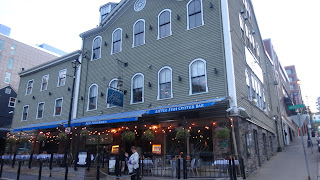 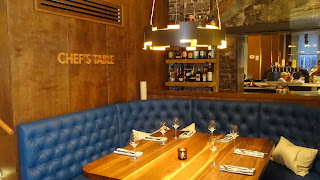 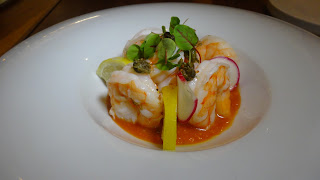 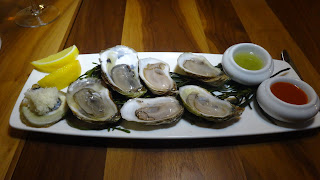 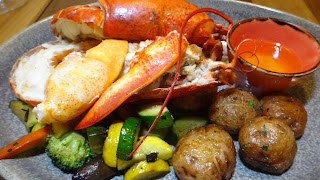 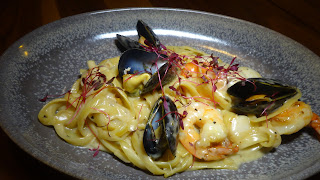 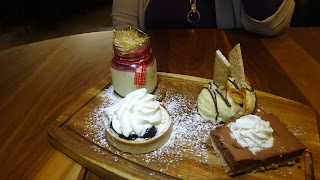 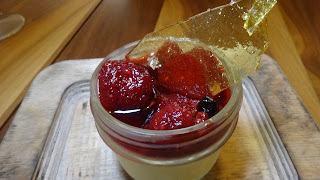 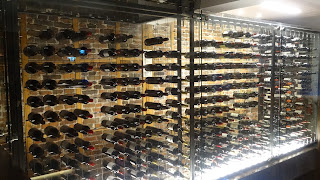 Posted by Kevin and Sue McCarthy the Travel Planners at 10:50 AM No comments: